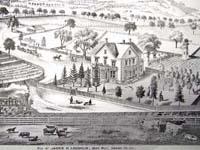 Back in 1834, Governor Figueroa of Mexico visited Sonoma County on a mission to establish a presidio which was to be named Santa Anna y Farias.

He selected a site on Mark West Creek that later became the property of Henry Mizer near a well known redwood tree that was still standing in 1877. This presidio was to be named after the then President and Vice President of Mexico.

The Mark West Area is only a small part of what made up Rancho San Miguel acquired by land grants from the Mexican Governor Alvardo in 1840 by William Marcus West. There were 23 land grants confirmed to original owners in Sonoma County. The foreigners to whom land grants were given were Jacob P. Lesse, John Fitch, John Bautista Rogers Cooper, John Wilson, and Mark West. The last three men were brothers-in-law to General Vallejo.

William Marcus West, a roving Scot was one of the original families to come to Sonoma County. He met Guadalupe Vasquez in Santa Cruz, Mexico, and married her at San Carlos Boromeo (Carmel) in 1834. That same year they traveled north eventually settling in Sonoma County. Mark and Guadalupe had seven children, most of whom were born here – Maria Luisa Del Carmet, Mark, John (Juan), William, Charles, Adelaide, and Chata.

In 1840 Mark West acquired the Rancho San Miguel land grant which included 6,663 acres between the Mark West and Santa Rosa Creeks. It supposedly was the “Richest Body of Land of the same number of acres in the state. There was not an acre of it that would not produce from seventy-five to one hundred bushels of wheat.” On the Rancho San Miguel, Mark West built a great adobe hacienda and established a trading post and post office near the beautiful stream which now bears his name. In exchange for the land, Mark West agreed to furnish cattle skins to General Vallejo and cut trees to supply lumber for the Mexican government. For these duties, Mark West reported to Mr. Larkin were filled with hard luck stories and excuses for why leather and timber shipments didn’t arrive in San Francisco as promised. Mark West was a lousy businessman and so it is sad to note that in 1877 “none of his descendants owned a foot of his splendid estate which (at that time) was worth over half a million dollars.” Mark West did leave something of value behind though – his name. (Mark West lies buried on a stony point, up Mark West Springs Road.)

John Marvin, the first State Superintendent of Public Schools, reported to the 1852 legislature, the statistics he had gathered in 1851. He reported that there were 250 children in Sonoma County. There were five schools in the County: Sonoma, Santa Rosa, Analy, Bodega, and last but not least, one at San Miguel Ranch (Mark West). Mark West was the only school that taught in Spanish, the rest were taught in English. They were supported by contributions and tuition money. The original Mark West School was located in the same location as we have today. However, the school was only one room. The area was also the hub of the town and included a general store, post office, blacksmith shop, and the adobe home on the banks of the Mark West Creek.

In 1920, Rosseter’s Inchcape won at Aqueduct and was a favorite to win the Kentucky Derby until he went lame. But his most treasured possession was a stallion named Disguise, who sired horses that won more than a million dollars for the Rosseter stables. In 1926, Disguise turned 29 and Rosseter and his wife planned a party for their horse that would set the Bay Area society on its collective ear He attracted the attention of every society editor in the nation and set a standard for innovative entertaining. The table on the lawn at Wikiup was shaped like a giant horseshoe. The birthday cake was grain and mash, the “candles” were carrots. The guest list was drawn from New York, San Francisco and Santa Rosa. L’Independenzia Band from Santa Rosa played “Happy Birthday.” And Disguise – with his equally famous jockey, Tod Sloan, astride, flashing the Rosseter colors, burnt orange and white – pranced like a 2-year-old into the center of the horseshoe. The parties held by Rossiter for his social and sporting friends remain legend in the Bay Area.

Located within the Mark West area is the Wikiup Rancho which was established in 1920 during the turn of the century. John Rosseter was the owner of Pacific Mail Steamship Company in San Francisco and was president of Sperry Flour Co. A leisure-time resident of Santa Rosa and an avid sportsman, Rosseter raised the sophistication level of the county several notches. On a hillside 200 yards from the Mark West Creek, he built his 800 acre summer rancho home and called it “Wikiup” to go with the tradition of the land. At his rancho he kept his racing greyhounds(he owned the fastest greyhound in the world, named Freedom), his prize Berkshire hogs, several ranch sired Grand Champion Black Angus Cattle and, most important to our area, the glamorous sport of thoroughbred racehorses. From the magnificent Rossiter Barn (considered, in its day, the finest facility of its type west of the Mississippi) which still stands on the Wikiup, came two Kentucky Derby winners.

In the 50’s and 60’s decade, change brought forth Larkfield as a shopping center and a housing development which is the commercial hub of the area.

The years of the horse in Sonoma County, like the early wine industry, were put on hold through hard times and war years. They came back together in the 1970’s. Vineyards and horse ranches, pretty to look at and growing in value.

In 1961 the Wikiup was purchased in its entirety by Capt. Stan Anderson and Cecil A. Kettle and throughout the next 30 years was developed, sometimes not so ideally, into a master planned community. 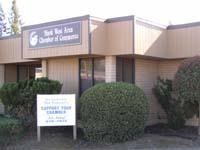 The extension of the Airport Sewer District into Wikiup made the property intune to the high growth decade of the eighties. Wikiup Professional Park was built in the late eighties and early nineties giving the area businesses the unique opportunity of working in a picturesque creekside setting.

The Chamber was first established in 1980 when several local business people banded together and formed the Chamber entity with Jim Chakedis as its first president. After much discussion, the Chamber was formally named the Greater Larkfield Chamber of Commerce.

The goal of these Chamber pioneers was to promote the business community of Larkfield and the surrounding area. Larkfield Shopping Center was the hub of the retail and service trade in the area.

The late 80’s brought unprecedented growth and expansion to the area. From the maturing Wikiup Hills to the developments of Saddlebrook and Mark West Estates, the revitalization of Larkfield Shopping Center, and the extreme growth of the Airport Business Center and industrial parks, it seemed all areas found expansion.

As the area entered the decade of the 90’s, it was noted that the sphere of influence had certainly outgrown the immediate Larkfield area. The name of the Chamber was changed to the Mark West Area Chamber of Commerce, as Mark West had settled in this area …a name that was felt to be representative of the area as a whole. History of the Mark West Area

Much of the independent nature of the Mark West Area has to do with the diversity of the services that supply the area. The Mark West School District was established in the 1890’s. Separate water and sewer districts have been established, with the expansion of the sewer treatment plant allowing for much of the late 80’s growth. The area includes its own fire station and is serviced by the County for police protection.

The boundaries of these separate districts have been used to determine the sphere of influence of the parameters of the West Area. Almost all encompass an area bounded by the Santa Rosa City Limits on the south, Shiloh Road on the North, from Sonoma County Airport on the West, and Porter Creek Road on the East. Within this area resides a population of almost 20,000 people of which many businesses are supporters of the Mark West Area of Chamber of Commerce and Visitors Center.

In 2007, the Chamber leased the building at 4787 Old Redwood Highway. The Chamber Office moved to this building and we opened the first Visitors Center in the Larkfield area. We also have 5 businesses as tenants, all great supporters of the Chamber!

Joining the chamber is an excellent way to connect with other businesses in the area and participate in the local government. Memberships also give many advertising and networking opportunities.